Flowering now, the beautiful “Mangrove Boobialla” Myoporum accuminatum is a common sight near the coast, especially in estuarine Casuarina forests, but is also found in rainforest and wet schlorephyll forest near the coast and coastal ranges. Look for its distinctive pretty white flowers with little purple spots, smooth, bright green elliptic leaves and roughly fissured bark.

It is generally considered a shrub or small tree, but can reach impressive sizes as the photo from Cellito Reserve shows.

The wrinkled, purplish fruit ripens in Spring and Summer and is relished by birds, which bring the seeds of other trees (and potentially weeds!) as they feed. They are also a favourite of First Nations people, and are described as having a sweet/salty taste. 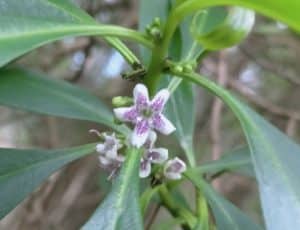 It is very similar to its narrower leaved inland cousin Myoporum montanum, also known as Waterbush because in the dry inland its presence is associated with reliable water sources. This species overlaps M accuminatum in its range, and some authors consider it as a subspecies encompassed by M accuminatum.

The other Boobialla family member coastal folks will be familiar with is Myoporum boninense, a low, often prostrate shrub with white flowers that lack the purple spots, found in coastal heath, on coastal cliffs and in sand dunes. 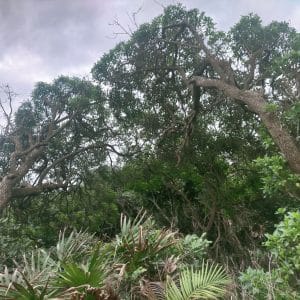